The Roman Colosseum is scheduled for a three year, $31 million renovation project beginning December 2012. The project will include repairs to the outside walls of the structure, as well as all internal and subterranean areas. The Colosseum will be open to the public during the restoration project.

BBC, “Italy’s Colosseum to be restored with private donation”

New radiocarbon dating of cremated remains suggests that burials at Stonehenge may have begun earlier than originally estimated and lasted for longer. Evidence now suggests that burials began at the same time as construction at the monument site and continued through the erection of the monument’s monolithic stones. While scientists suggest that Stonhenge might have marked the site of a Neolithic royal cemetery, they continue to emphasize the ceremonial functions of this unique monument. Read more at:

This exhibition, which was on view at the Onassis Cultural Center in New York City from December 10, 2008 through May 9, 2009, told the complex story of women’s roles in Classical Athens. Bringing together 155 rare and extraordinary archaeological objects, the exhibition re-examined preconceptions about the exclusion of ancient Athenian women from public life. The story told by these objects, and experienced in the galleries, showed how women’s participation in cults and festivals contributed not only to personal fulfillment, but also to civic identity. Among the treasures being brought to New York for the exhibition were marble statues of the goddesses Artemis and Athena (National Archaeological Museum, Athens); a white-ground vase with an image of Artemis by the Pan Painter (State Hermitage Museum, Petersburg); and a red-figure vase with an image of Iphigenia, the legendary heroine worshiped as a cult figure and seen as a model for priestesses (Museo Archeologico Nazionale, Ferrara).

“Beyond Babylon” Closes in New York

Four thousand years ago, the great kingdoms of the Near East and Aegean were linked through a complex network of trade and diplomacy. The artistic impact of this international exchange of raw materials, luxury goods and people was recently examined in an exhibit at the Metropolitan Museum of Art in New York City. “Beyond Babylon: Art, Trade and Diplomacy in the Second Millennium B.C.” included over 350 objects illustrating the fusion of New Eastern, Egyptian and Aegean styles. The works on display came from royal palaces, tombs and temples, as well as a unique shipwreck found off the southern coast of Turkey. 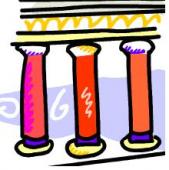 More than 280 artifacts and works of art illustrating the history and achievements of Minoan Crete were recently on view at the Onassis Cultural Center in New York City (645 Fifth Avenue). “From the Land of the Labyrinth: Minoan Crete, 3000 – 1100 B.C.” included objects on loan from archaeological museums in Crete, including gold jewelry, pottery, inscribed clay tablets, votive offerings and wall paintings. The exhibit closed on September 13, 2008.

As the 2008 Olympics in Beijing draw near, new evidence on another ancient game, the Sebasta, has recently been discovered while excavating in advance of subway construction in Naples (ancient Neapolis). The Sebasta were held in held in honor of the emperor Augustus and were subject to the same regulations as the Olympic Games. To read more about the Sebasta, the subway excavations in Naples and the role of archeologists in subway construction, check out the following sites.

Scholars have long debated the authenticity of Homer’s epic stories of the Trojan War. Two scientists, Marcello O. Magnasco of Rockefeller University in New York and Constantino Baikouzis of the Astronomical Observatory in La Plata, Argentina, have recently added new information to the debate. Using astronomical clues, such as star and sun positions mentioned in the “Odyssey”, they have computed the date that Odysseus returned home to Ithaca and slaughtered his wife Penelope’s suitors. According to the pair, this bloody event occurred on April 16, 1178 B.C.E.